If you were planning to raft the Kern River this summer, you’re no doubt disappointed. The Kern, which has always been a rafting hotspot in Southern California, has only been this low three times in the past 120 years. This historic situation has reduced river flows so severely that many rafting companies along the Kern are only able to offer small, inflatable kayaks as an alternative to whitewater rafting. And the summer season is barely in full swing. “I hope Mother Nature plays ball, because we need to get that river back full of water,” local radio host Scott Cox said in early July on his show.

Adventure seekers won’t find much high-level activity on the Kern. According to a recent KGET story, reporters said that the upper and lower Kern River is flowing in the range of 500 cubic feet per second. For a rafting trip to be successful, water needs to flow at a minimum of 800 cubic feet per second. In past years, the Kern has provided both optimal and less-than-ideal rafting seasons. Unfortunately for many who live and play in the Kern River Valley, this year’s an historically tough one. 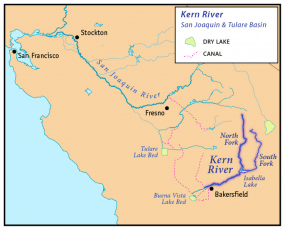 So what’s happening to the Kern? It’s a combination of weighty factors. Extremely low snowmelt the past two years and a gradual drawdown of the Isabella Dam over the past decade have coupled to create a crisis. And everyone from local farmers to area campgrounds and rafting companies all down the canyon are taking the hit.

In addition, water rights in Southern California have long been fairly contentious, and the Kern hasn’t escaped that battle through the years. The City of Bakersfield, in particular, has fought for water rights ownership in the past. But this recent drought is not helping matters. Because folks aren’t rafting, they also aren’t helping boost the local economy.

Kern River Valley Chamber President Fred Roach recently told station KGET in Bakersfield, California, “There’s been a lot of cancellations at motels and people that have decided not to come because they were coming just for the white water rafting.”

But if you want to try whitewater rafting this summer, you can still roar through the rapids on a great alternative river located a few hours north – The American River in central California.

American River rafting options include the North Fork, South Fork, and Middle Fork. We’re already done running the North Fork for the season, which is typical for that branch this time of year. However, the Middle and South Forks are controlled by upstream reservoir water releases. Optimal flows for whitewater rafting usually continue throughout the summer and fall months, often as late as October.

The Middle Fork rafting experience, which includes Class IV rapids, covers 18 miles for a full day of whitewater rafting and includes the infamous Tunnel Chute Rapids. If you’re more into family-style rafting and slightly calmer waters, try one of our 5 different rafting experiences on the South Fork of the American River.

We know you won’t be disappointed by heading a few hours north to raft with us on some of the most scenic, wild, and wonderful rapids in California. Book online here today.